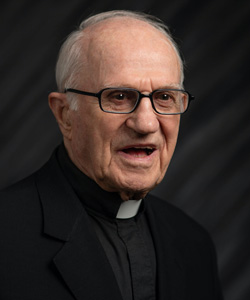 Ed was born in Milwaukee on January 20, 1922, and attended St. Adalbert's Grade School and Marquette University High School in Milwaukee. He completed two years at Marquette University before entering the Society of Jesus at St. Stanislaus Seminary, Florissant, Missouri on February 4, 1942. He had the usual Jesuit course of studies at St. Stanislaus, St. Louis University, and St. Mary's College. Ed was ordained on June 16, 1954, made tertianship in Decatur, IL, and pronounced his final vows on August 15, 1958.

During regency, Ed taught English and theology at Rockhurst High School in Kansas City (1949-1951). After tertianship he was an associate pastor at the Church of the Gesu in Milwaukee for one year and taught for two years at Campion Jesuit High School in Prairie du Chien, Wisconsin. In 1959, the direction of Ed's ministry changed when he decided not to pursue a doctorate in English. Although he had never given a men's retreat or worked in a retreat house, he was missioned to work at Jesuit Retreat House (a.k.a. "Demontreville") near St. Paul, Minnesota. He ministered at Demontreville for 58 years until, in 2017 (at the age of 95 years old), he was missioned to pray for the Church and the Society at St. Camillus Jesuit Community. For 24 of those years Ed served as the director of this very successful ministry. Through his efforts and the efforts of the many Jesuits he recruited to offer weekend retreats at Demontreville, thousands upon thousands of Catholic men from the Twin Cities area were exposed to the dynamics of the Spiritual Exercises and had an opportunity to deepen their life in the spirit.

Ed stated Demontreville's mission simply: "We will do one thing; we will do that very well." And that is what the retreat house has done!

Every Jesuit begins his life in the Society by pondering the First Principle and Foundation. Then living it defines the rest of the journey. Ed Sthokal lived well the part of the foundation which talks about "using these things to the extent they help us to our end." He was a man of creativity, resourcefulness, and sharply focused intention. He loved the Exercises and deeply loved the men of Demontreville. His bluntness was always underpinned with genuine affection and respect. Perhaps the greatest tribute is to say is that Ed Sthokal was a powerful instrument of God's grace.

Ed will be cremated, and, when the St. Camillus Jesuit Community can gather together as one, there will be a funeral Mass. Plans are being made for a memorial Mass at St. Thomas More Catholic Community in St. Paul.