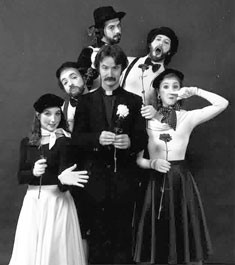 “My hope is that the stories I tell will help people open their hearts to the wonder of God’s love and to believe that forgiveness is possible and that there is much more to life than what we experience through our senses.” — Jesuit Father J. Michael Sparough
Drama, Dance, Mime and Music Help Jesuit Bring Bible Stories to Life

Fr. Sparough, who is also a retreat director, founder of Charis Ministries for young adults and author of several books, says he sees himself as a “contemporary evangelist” whose storytelling skills help inspire.

“My hope is that the stories I tell will help people open their hearts to the wonder of God’s love and to believe that forgiveness is possible and that there is much more to life than what we experience through our senses,” he says.

Fr. Sparough’s English and theatre studies coincided with the popularity of musicals such as “Godspell” and “Jesus Christ Superstar,” which moved him to write a sequel to “Godspell” with his friend, Jesuit Father Mitch Pacwa.

Their production, titled “J.C. (And Other Resurrection Stories),” began with the death of Jesus and moved through the Resurrection narratives. A staff member from the Episcopal diocese of Southern Ohio saw the show and invited Fr. Sparough to stage a few scenes from his musical on Fountain Square, the civic plaza in Cincinnati. With a group of 100 performers, Fr. Sparough recreated the scenes in the tradition of the medieval morality plays performed in public plazas.

Following the success of the event, Fr. Sparough founded the Fountain Square Fools in 1975, a “portable theatre proclaiming Good News,” using drama, dance, mime and music to bring the Gospels to life. Fr. Sparough served as artistic director, traveling with the group across the U.S. and to Canada, England and Ireland for the next 16 years.

After his time with the Fountain Square Fools, he moved to the Bellarmine Retreat House in Illinois, where he continues to dramatize biblical stories. Fr. Sparough also began doing a unique style of dramatic parish missions with the help of his four siblings, calling themselves the Sparough Family Mission Team.

“Many of us are so familiar with the stories of the Bible that we have a hard time hearing the message,” said Fr. Sparough. “A fresh dramatization of a biblical story or parable can recast the familiar in fresh clothes and bring its truth alive.”

For the complete story about Fr. Sparough, visit Arts and Faith, an ongoing series from Loyola Press.